by Edg
Just out of curiosity, does anyone know which factors govern whether Oripa will fold the full estimation or not? For example, this gives a full estimation (takes about 3min to do it)

by Kabuntan
For the second one, it doesn't give anything, or it keeps searching? Perhaps it needs much more than a few minutes to estimate it?

by Edg
For the second one, if the "full estimation" box is checked it gives nothing, with the box unchecked it gives the folded form straight away just not the coloured one. For the first one (with the box checked) it appears to lock up, then gives both folded forms after a few minutes. What puzzles me is it seems to "know" if it can't render it immediately in the one case, but takes so long for the other?

by Foldtastic
Dang the folds are so close together for the pleats on the first one...that's going to take some large paper.

by Edg
Yeah, I had 70cm paper in mind when working on it (I struggle to get hold of anything decent in bigger sizes) I'm copying the scales from Lang's ODS...I would prefer to have wider pleats and shape the scales in a different way, but then I'd have to reduce the number of scales because efficiency would be way down!

mike352 wrote:How do I export crease patterns as a graphics file instead of the Oripa file types?

by Foldtastic
A really great feature to add would be layer management. I had a design where different layers could be on top of one another, ORIPA choose a different layer to be on top than what I wanted....

...so I got interested in how layer management worked in ORIPA....I created a simple crease pattern and tried adding the creases in different orders. As it turns out that the order in which the creases are drawn influences the layers in the final model. As long as I add the creases in the same order, it folds the layers the same way, so it is consistent.

However, I can't find a predictable way to manage the layers based on the order of drawing creases. I already checked and it isn't following a "First drawn, first folded" or a "Last Drawn, First Folded" methodology.

by BlueFireOrigami
Could someone please virtually collapse this CP in ORIPA for me? I didn't post it in the help section because I think it would be a waste to make a completely new topic for a question with just one answer.

I have collapsed the body, it's just the head that's a bit confusing.

I can't seem to get ORIPA working at the moment, but I will keep trying.

BlueFireOrigami wrote:Could someone please virtually collapse this CP in ORIPA for me? I didn't post it in the help section because I think it would be a waste to make a completely new topic for a question with just one answer.

I have collapsed the body, it's just the head that's a bit confusing.

I can't seem to get ORIPA working at the moment, but I will keep trying.

Maybe you'd get help if you posted the file somewhere for people to download it and revise it, you know it's a difficult to draw CP an all.

by BlueFireOrigami
It's okay, no need for anyone to do it. I got ORIPA working, and it is pretty cool

by mixmastermarc16
ok so not sure if people saw my post about oripa...but....im wondering if any of you computer savy peoples would be able to port ORIPA to android based format APK? i know i for one would love to have oripa on my phone or tablet for those "spur of the moment" ideas. any volunteers? take one for the team!

But I'm not sure if it will be able to handle the dependencies for the Java3D libraries.

by Brimstone
How about Orihime developed by Meguro Toshiyuki? Has anyone tried it? It "folds" CP's, the colors are not as nice as in Oripa, but it can fold some CP's that Oripa can't. You can see some examples of the "folded" models at: http://www.flickr.com/photos/tmeg777 You can also draw CP's with it, but it is not its strongest point, so you should draw them in Oripa and then export them as .obj and read them in Orihime.

by Brimstone
This is the test of both Oripa (top) and Orihime (bottom) "folding" the same CP drawn in Oripa. The result in Orihime is not perfect, but very close. 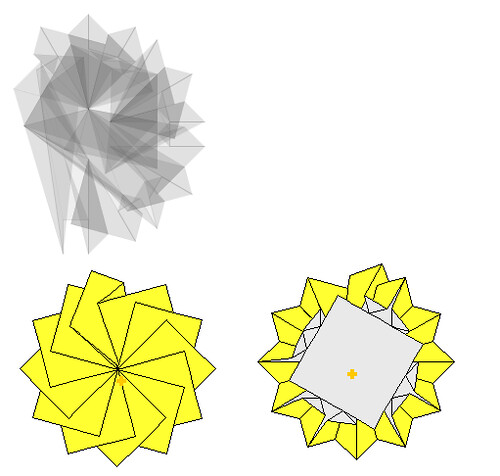