Do any of you guys have any Guspath Go diagrams? Particularily his Goldendrake diagrams? Any others are also appreciated. However, if you don't have them, then where can I get them? Any help is greatly appreciated.

I'd try google if I were you.... the two sites that have his diagrams are at the top of the list. search "guspath go origami".

That and the origami database (http://db.origami.com/). The whole reason that website was created was to answer this sort of question.

If you still can't find the diagrams you're looking for, they probably don't exist, and asking for them here won't get you anywhere. Do a little research of your own, ok?
http://www.origamiweekly.blogspot.com
http://www.flickr.com/photos/ahudson
Top

So you know, he doesn't have any diagrams for any of his complex models. Only his simple ones, the lion, the welsh corgi, and the mouse.(I think thats all of them).

He hasn't even really released any crease patterns for most of his complex stuff. The closest you'll get is that photo-diagram thing for his gryphon.
http://www.flickr.com/photos/bluepaper/
Top

man i've been really rying hard to ge thte "simple dragon" right. he says on a deviant art post that it is from a blintz fish base. heh, no luck yet.. but alot of cool doodle models have arisen as a result :) one day! and then i'll get to post it on the folded from picture and no cp no diagram topic :D :D :D
"The most profound statements are the ones that never get said"

BluePaper wrote:So you know, he doesn't have any diagrams for any of his complex models. Only his simple ones, the lion, the welsh corgi, and the mouse.(I think thats all of them).

That one is diagrammed as well.

to ahudson: not to be a snob, but i looked at the origami database, and his website, but saw that he said he had diagrams for certain models, but they didn't exist.

anyway, thanks for the responses. i'm a little disappointed though, seeing as how he said he had diagrams for his models (or some of them atleast). oh well. thanks everyone!
Last edited by origami obsessed person on November 8th, 2008, 10:59 pm, edited 1 time in total.
i know what this looks like, but it isn't what it seems........... i think.
Top

Maybe he plans to combine them to a book at some time?
Don't be too disappointed, you don't know what the future will bring.
Origami Austria ... Flickr ... Anna
Top

Guspath's "Welsh Corgi" is in my book Picture Perfect Origami

and his "Mouse" is in my dummies book

As you can tell, I'm a big fan of his work!
Top

I really hope he releases diagrams, or at least a cp of his Hippogriff v3, that model is sweet!

Has anyone on this forum tried to fold his gryphon from the partial photo diagram? I am thinking of trying it out.

Andrew
If you can't fold it, try a bazooka.
My Flickr ->
http://www.flickr.com/photos/rdudevr55/
Top

hey, so im pretty close to the simple dragon now!! the head is a little shakey, but i get the concept. i mainly having trouble with the inside of the body..like where the wings meet the tail....ehh oh well one day!! so close!!! and no cp or anything!!!!

"The most profound statements are the ones that never get said"

oh, and know what? i think his gryphon, firedrake/goldendrake, pegasus, etc.. all comes from the same type of base maybe... the one he has picture diagram for..cause like the gryphon photo diagram is very vague, so it just hit my mind that maybe this is mainly a base, a base for almost ANY winged thingy... :D :D i shall try it out
"The most profound statements are the ones that never get said"

Right now I'm working on the Gryphon in class. I believe I know what base it comes from. I will post pictures of how to make the missing steps if I ever get to it. If you still are looking for the diagrams for his Gryphon they can be found here: http://design.origami.free.fr/bestof/go ... essmax.jpg

Much abliged, and Happy folding!

I never could fold that Gryphon... The model simply did not come out the way it should do... I think I haven't did some sinks... this sinks are suposed to be missing in that photodiagrams.. something between 9 and 10 steps...

The crease pattern for his butterfly, the partial diagram of the gryphon, the first version diagram of the hippogriff, cp for corgi, cp for lion, cp for cat, fox diagram, and regualr computer mouse diagram can all be found on Nicholas Terry's site in the diagrams section under Guspath Go.

I think some of them I repeated but oh well. These are all the ones I know of.

"There are times when hope itself is an act of heroism. So here's to hope, and everyday heroes. " -Jacqueline Carey
I totally just discovered I have a macro function on my camera- I'm lovin it!
http://www.flickr.com/photos/23352404@N06/sets/
Top

Re: Any Guspath Go diagrams?

He also has helpful hints hidden in his comments section, I found some that made more sense than they did 14 years ago so I gave his simple dragon a try, the head is definitely tricky, it's going to take a few tries to get right, heres what I got first time around. 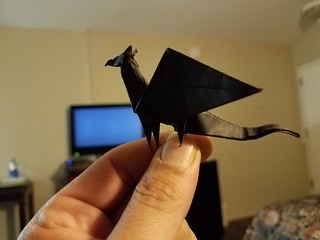