No, October hasn't started early this year. I decided to borrow an idea from the Origami Design Tournament for my very first time as host of the monthly challenge. I'm adding a poll so you guys can choose the topic for next month. You have up to the last minute of September to vote.

There are still a few days before the voting closes. I do hope get a couple more votes to be sure of the final decision. A difference of three votes between the first and second option is pretty small.

Great, now the difference is even smaller

C'mon guys! Help me by campaigning for the option you voted for! Why do you want to fold (1) anything from a brown paper bag, (2) puppets from brown paper bags, (3) tatos, or (4) models evoking world problems for the monthly challenge.

If you convince others to vote for your option, it's more likely that it'll win.

This has actually been very exciting

. Just yesterday "world problems" was winning over "tatos" by three votes, now the tables have turned

I wonder which will win in the end. They're so close to each other; I don't think one nor the other will be able to sprint far ahead during the remaining time. It's like watching a horse race

Well, I voted for "puppets folded exclusively from a brown paper bag" for a couple of reason:

1) I've thought about that particular medium/subject pairing before but never attempted it and I'd like to give it a try. It seems like really interesting limitation to overcome and the results might be surprising.

I'm against brown paper bags because you don't get them here. So I would first need to find some brown paper and make a paper bag out of it, not knowing whether it fits the rules, because I don't know the exact layout of the bags you mean.
Origami Austria ... Flickr ... Anna
Top

Thanks for your thoughts and vote juston and origami_8

. So who of the eight voters will campaign in favor of origami about world problems, and who in favor of folding anything from a paper bag? Go for it!


origami_8 wrote:I'm against brown paper bags because you don't get them here. So I would first need to find some brown paper and make a paper bag out of it, not knowing whether it fits the rules, because I don't know the exact layout of the bags you mean.

I'm sorry to read that origami_8. I found this video showing how to make a paper bag like the one we're talking about, although I can't garantee it has the common proportions: https://www.youtube.com/watch?v=SwBYuPjXuw8

It's in Spanish but it's definitely not hard to follow.

I'm gonna have to choose the theme between the two finalists

I've read and heard many origamists declaring that origami is an artform. One thing I've loved about other forms of art is their potential to offer an original perspective about different world problems. In that sense art can help make a better world.

These are examples of artworks regarding world problems.

Displaced by Fernando Botero, 1999. This is about peasants and their families which end up running away from their own homes and lands because they become too dangerous due to the war.

Create an original model about a world problem... any world problem: like the different forms of violence, types of discrimination, environmental issues, poverty, corruption, just to name a few.

What’s mandatory
-Insinuate, or even clearly show, the world problem through the fold (folded model). For example, in order to express «violence against animals» an ordinary origami horse isn’t enough.
-State the details of the model along with the picture: Type of material? Number of sheets? Shape of each sheet? Size of each one and of the finished model? Cuts? Glue?

You have till October 31st to present your model or models. jeko will be the challenge's judge

What's the point of allowing more than one sheet and multiple models per participant if putting them together to represent something is prohibited?
Instagram: https://www.instagram.com/origami.pete/
Twiter: https://twitter.com/origamiPete
My forum gallery: http://snkhan.co.uk/forum/viewtopic.php?f=15&t=11647
Top

That's a good question: the challenge here is to be able to convey a message, or concept, in a single model. The many sheets are in order to allow multipiece or modular models. And you can present different entries for the challenge, as usual, but each one participates independently; like in the August challenge I presented both Lever and Balance. They both competed, along with the models created by the other origamists. At the end, according to the judge's concept, Balance defeated Lever and the other models as well.

That's the reason for those particular rules

Gerardo wrote:That's a good question: the challenge here is to be able to convey a message, or concept, in a single model

That's the reason for those rules.

Interesting! All righty then, at first I felt like my hands have been put in stocks, but a fold finds a way...

Just to be clear, a model like this would not be allowed 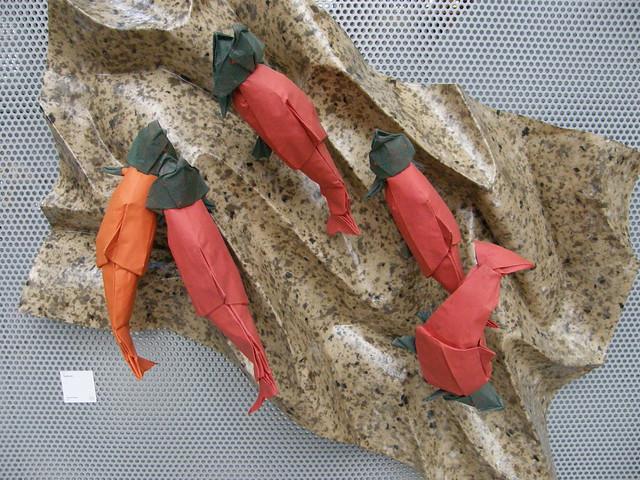 but a model like this would still be ok? 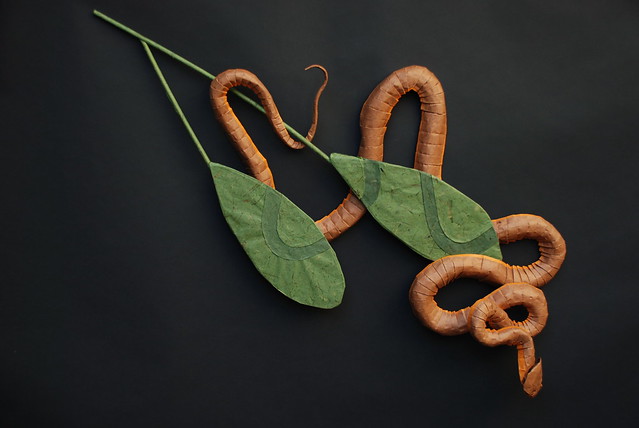 Basically what I'm asking is whether you'd consider the leaf a part of one multi-piece model or a separate object.
Instagram: https://www.instagram.com/origami.pete/
Twiter: https://twitter.com/origamiPete
My forum gallery: http://snkhan.co.uk/forum/viewtopic.php?f=15&t=11647
Top

First of all, I just discovered I'm using the concept wrong

. I looked for the definition and found this:


Origami Resource Center wrote:Multipiece origami in which differently folded pieces are built together to form (say) a building or a scene. Yoshihide and Momotani are well-known exponents of this style of paper folding.

So that's what I meant with composition and it isn't allowed. What is allowed is really called a composite model:


Origami Resource Center wrote:Composite origami where a model is made from two or more different pieces each folded in different ways


Getting back to the point, you wrote...


origamipete wrote:...Basically what I'm asking is whether you'd consider the leaf a part of one multi-piece model or a separate object.

Awesome... with this question, everything will be a lot more clear

As they are, I'd say that none of them can be assumed as composite models, buuuuuut... if you create something like pockets and tips, for example, in order to connect one paper with the other then you have a composite model. So you could do that with the water and the fish and also with the branch and the snake (connect the papers together), but, from what I'm seeing, it doesn't seem to be the case. Does that make it a bit more clear?

Now, don't forget that jeko—as judge—has the license to take those details into account (like how many sheets were used for the model) when choosing the winner.

Gerardo wrote:-The judge can take into consideration the stated details in order to choose the winning model.

I've designed something for this month, and this time I triple checked the rules! I just need to make the paper for it!
Top
Post Reply
40 posts