The topic for this month is a rather broad one as there were very few entries last month. I really hope to see more of you guys participate this time.
The topic is "Movement with no legs". You can create anything which has the ability to move. However, it should not possess legs or limbs (e.g. birds and octopus are not allowed as they have legs). It does not have to be a living thing. Be as creative as possible!

Rules: one sheet of paper, no cuts and no glue (except MC for shaping).

Jeko will be the judge. Good luck!
Last edited by Tahaorigami on April 2nd, 2019, 3:07 pm, edited 1 time in total.
My Flickr: http://www.flickr.com/photos/tahaorigami
My Gallery: http://snkhan.co.uk/forum/viewtopic.php?f=15&t=11311
My Facebook Page: http://www.facebook.com/tahaorigami
8)
Top

Oops. Changed it. Thanks!

Is it alright if the model doesn't move but shows motion?
Because a couple of months back i had made a model by combining two different models.

Mihir Potnis wrote:Is it alright if the model doesn't move but shows motion?
Because a couple of months back i had made a model by combining two different models.

The topic doesn't seem to imply that the model itself has to move, only that it depicts something that can.

But models for challenges have to be made within the month of the challenge. Perhaps if you edit the model it might be accepted
Top

Do fins count as limbs?
After the fall, we rise.

This is just a big can of worms, isn't it? It'd be safe to say yes unless tahaorigami and jeko want to allow it
Top

Okay I guess I should clarify a few things:
Fins do NOT count as limbs in this case. Hence, you're open to the sea world except for some creatures such as crabs and octopus.
Although fins play a major rule in movement, I won't count them as legs here or else choices of models would be very limited. Hence, fish are allowed!
Birds would also have been allowed but they possess a pair of legs/talons. Hence, they are not! However, aeroplanes are!

Mihir Potnis yes as long as it's capable of showing movement. It should just have the potential to move on it's own and should have no legs. If these 2 rules are fulfilled then it's good to go!
I'm not sure if you can use a previous model. I would suggest don't unless Jeko allows it!

Come on guys there are just soooo many possibilities for this month's challenge! Can't wait for your entries!

Tahaorigami wrote:I'm not sure if you can use a previous model. I would suggest don't unless Jeko allows it!

Indeed, the models needs to be designed (or significantly re-designed) this month.
Top

Firstfold will be first again - here is my first entry. I decided to make entries that reinvent the wheel.

Fold a square into a checkerboard pattern, loop into a cone, offset the ends into offset ovals, then you have a ROLLVAL with most unpredictable rolling paths.

My first ever dragon 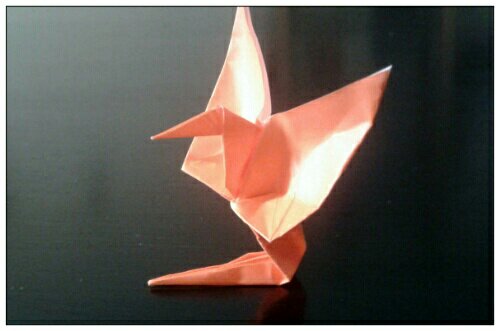 Reinventing the wheel Part 3
This folded object moves in three different ways - see the story at the end of the video as to how it moves in the third way. 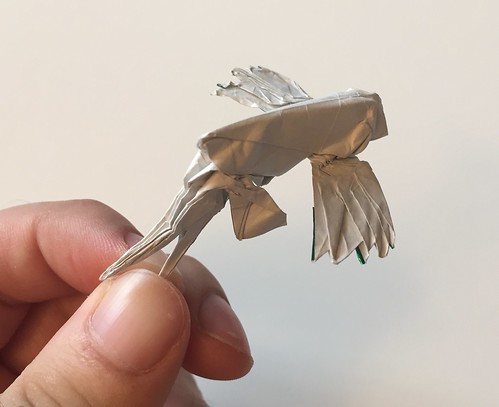 Flying Fish (first attempt) by DirgeOfDreams, on Flickr
After the fall, we rise.

Hello everyone! This is my first participation in the challenge on this forum. I usually post on the French forum, but there was no challenge this month and I really loved the theme here... Anyway, here is my idea: 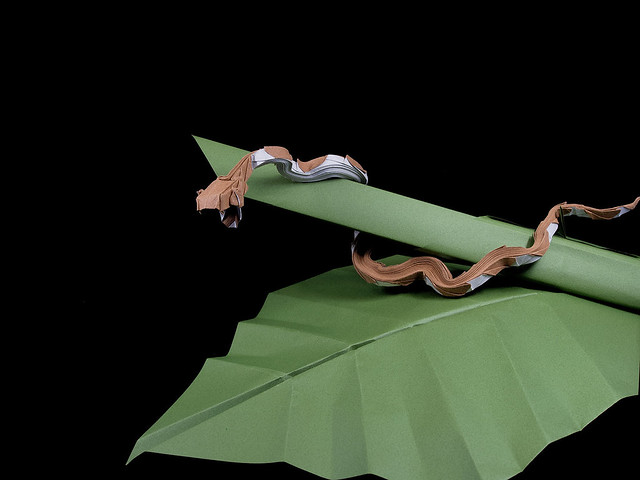 Tree Snake by Victorien RAMI
From one uncut square of John Gerard's handmade paper. I used two squares of Tant paper for the "branch" and the leaf.
My Flickr
Top 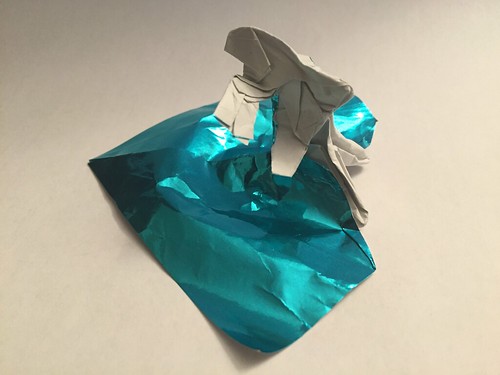 Fish and water are from the same square of foil paper. The structure is the same as "Splash" by Satoshi Kamiya.
After the fall, we rise.