Speak your heart out through your model! Did you watch the documentary Between the Folds? Well, do you remember a part in the film in which origami personalities were asked to decide between emotion and technique? Artists like Eric Joisel defended the importance of emotion over technique in the future generations of origamists.

Fernando Gilgado's Under Mortgage and The Mass Production of Members of Society by me are great examples of what I'm talking about.

Please read carefully all the rules. Among other things, it's particularly important that you don't add any description along with the picture of your model. No "it's this or it represents that...". You know? You can add a title, but only if its cryptic (and poetic if you want as well). So no titles that say what you feel strongly about. Remember, the idea is that the very model says it for you. OK? It's also very important, that you follow these same rules (just during the challenge) in any other website where you post the model: Flickr, Facebook, Instagram, etc.

What’s allowed
-Any number of sheets.
-Squares, other rectangles, regular polygons, circles, and straight isosceles triangles.
-Very little cutting.
-Very little gluing.
-More than one model per origamist. Each model participates independently.
-A title for your model, but only if its cryptic (and poetic if you want as well).
-Writing on your fold, but the writing must be on your fold... nowhere else, and it must once again be cryptic. No digital addition of the words in the picture either.

What isn’t allowed
-Variations: Taking someone else’s model as base for yours
-Derivative works: Making an origami version of an existing work of art. It's still a derivative work if you change it a bit.
-Compositions: Folding more than one model and placing them like a scene
-Any type of description of what your model is or represents.
-Revealing what your model is anywhere on the Web: Flickr, Facebook, Instagram, anywhere. If you don't follow this rule, your model can be disqualified.

What’s mandatory
-Express the very idea you feel strongly about through the model, instead of using something concrete as the model's subject.
-State the details of the model along with the picture: Type of material? Number of sheets? Shape of each sheet? Size of each one and of the finished model? Cuts? Glue? This isn't the same as describing what it is or represents.

What’s recommended
-Assume the fold of your model as a work of art.
-Think carefully of the material used for folding (color, texture, type of material) in order to better express your idea.
-Take the best picture, or pictures, you’re able to of the fold.

I'll announce here who's the judge of the challenge as soon as one is chosen in the September challenge.

Sorry for the long message. Just have fun, express your sensibility, get out of your comfort zone, and make artist Joisel proud


Edit: I added among the rules that, if you add words to your fold they must physically be on your fold. You can't add them by editing the picture you embed here.
Last edited by Gerardo on October 7th, 2019, 3:47 pm, edited 6 times in total.
Top

I've got an idea--this should be fun.
After the fall, we rise.

1. The rules say multiple sheets are allowed, but then that you can't have more than one model in a scene? So does that basically mean they have to be connected?

2. Are we allowed to use the photography of the model as a way to express the message? Or should we minimize it?
My instagram: https://www.instagram.com/theplantpsychologist/
My youtube: https://www.youtube.com/channel/UCJPCcy ... U8oLMv5WpQ
My flickr: https://www.flickr.com/people/185437267@N03/
Top

. I answer them both bellow.


NeverCeaseToCrease wrote:1. The rules say multiple sheets are allowed, but then that you can't have more than one model in a scene? So does that basically mean they have to be connected?

Now, don't forget that the judge has the license to take those details into account (like how many sheets were used for the model) when choosing the winner. OK?

NeverCeaseToCrease wrote:2. Are we allowed to use the photography of the model as a way to express the message? Or should we minimize it?

I'd need a better idea of what you mean. Now, I'm assuming you don't want to share too much information about your idea publicly. If that's the case, I propose you send me an email message and explain it all in more detail. OK? But please don't send me a private message through the forum, I have the forum inbox full. Instead of that, send it to my email address gerardo(a)neorigami.com
Top

A winner has been chosen regarding the September challenge. dazda will be this month's judge!
Top

I don't actually have an idea yet, the inability to use more than one design seems to be the most limiting factor.

As an example of the message in the photo is if I were to fold a whale and photograph it with a blue backdrop, versus photographing it lying on it's side on the beach. The model may be the same but the photos convey different messages. Would that be allowed, to use the background or other elements of the photo to add more meaning than just the model alone?
My instagram: https://www.instagram.com/theplantpsychologist/
My youtube: https://www.youtube.com/channel/UCJPCcy ... U8oLMv5WpQ
My flickr: https://www.flickr.com/people/185437267@N03/
Top

It really is a good question NeverCeaseToCrease. I'd say I'm not a sadist or anything like that

, but I am really happy you're finding it challenging to express an idea through a single model. I hope you're not the only one

. That's the real test here: expressiveness over complexity. You know?

So, think about my two examples: Under Mortgage by Gilgado and The Mass Production of Members of Society by me. They both combine more than one element in a single model in order to say something. Know what I mean? That's what I'm talking about when I say that neither of them are "using something concrete as the model's subject".

Having said that: no, the message can't depend on the photo...


Gerardo wrote: -Express the very idea you feel strongly about through the model (...)
-Assume the fold of your model as a work of art (...)

In this challenge we're all folding artists. Let's say we were invited to show a folded work in an art gallery, but exclusively the very folded work; not a picture of it nor a composition. So, the challenge is: how would you express an idea (and not just any idea, one about something you feel strongly about) through a model?

Please let me know if this answers your question.


You can do this people! Everyone I've met here on this forum is supersmart and creative

I have an ordinary live; middle class and that sort of things. It's pretty much OK.

Now, as part of my ordinary life there have been things I have had to experience and despised! Things that makes me wanna scream

Around four months ago victorien proposed a creation challenge in which we had to represent "power". So I took the opportunity to scream and express some things I've felt for some time, through an origami model. The model might not be clear to everybody. I honestly don't care about that. The Mass Production of Members of Society is a riddle about an aspect of my heart. I won't spoon-feed its meaning to the public

. Instead of that, I want each one to take a moment to ponder on what's going on with the model

Most of us, probably everyone who's reading this, have felt f*ed up

about one thing or another at some point in our lives... even if you're currently 13 or something. So do what I did: scream it out through an original origami design 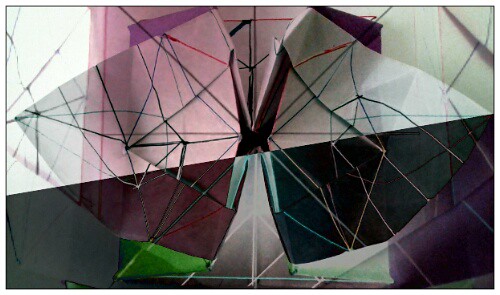 Three original designs overlaid into one image to convey the concept I have in mind. All are made from a single square no cuts or glue.
Top

Traditional boat design adapted to be made from a 4:1 strip of paper instead of a square. Waves are a starburst tato I designed after the previous challenge had passed.
Top

This is a process of self-exploration: learn a bit more about your self. Therapeutic in a sense... so what's going on with your life and what has happened in the past?

For example, can you imagine the pressure and constant threat of loosing your own home? Talk about life shattering events! You know? If you fall behind with your payments and interests you can literally become "homeless". What will happen to you and your family?!

Say that's what you're currently feeling. How would you scream it outloud through origami? That's what I think about when I take a look at Under Mortgage by Gilgado. Can you see the person's suffering caused by his or her very home?! What an irony... it's your home! You're supposed to feel safe in your home, but instead, you're feeling like it's actually "killing" you! Know what I mean?

Now, if that model was actually participating in this challenge, it would need a different title; its too literal. It would have to be cryptic, and maybe also poetic. In that case, I would have named it something like The Threat of a Snail Loosing its Shell. How about you? What name would you have given it?

Grace159 wrote:Three original designs overlaid into one image to convey the concept I have in mind. All are made from a single square no cuts or glue.

Grace159 wrote:Traditional boat design adapted to be made from a 4:1 strip of paper instead of a square. Waves are a starburst tato I designed after the previous challenge had passed.

Thank you Grace for being the first one to participate

. Now, from your description I'm understanding you made two compositions each one combining more then one model. That's not allowed. Did you read that among the rules? Aside from that, you explained what is it in your second post. You're not supposed to do that either.

Hmm, I think I'll have to sit this challenge out as I am having trouble thinking of ways to express dynamic concepts with a single model. I am interested in what other people will share.
Top

I broke down into a couple of steps how I navigated through the rules of this challenge in order to create my own model. Now, it isn't the only way, but maybe this steps can help some of you create something for the challenge:
Was I able to make the steps clear? Hope they help some of you, but you can also look for your own way to navigate through the challenge's rules

Grace159 wrote:Hmm, I think I'll have to sit this challenge out as I am having trouble thinking of ways to express dynamic concepts with a single model. I am interested in what other people will share.

I really appreciate the fact that you posted the first submissions

. I hope you get an eureka moment, but if you don't, I understand and respect your decision Grace.

EDIT: I added the recommendation of not posting the sketch during the challenge.
Top

The following scenes from this tv series actually have to do with what this challenge is about. Please watch just the scenes at:

The episode is here: https://www.dailymotion.com/video/x57bfac

After you've seen the three scenes, tell me: does this make better sense to you? Now, as I had said before, your model doesn't necessarily have to come from a negative feeling, it can come from your sense of passion, bliss, excitement, joy, peace...
Top