For this challenge, think of someone you know and for which you feel something you haven't explicitly told that person. Imagine you are giving that person the best fold of an original creation of yours. Through your fold, you would be expressing that feeling to the person for the very first time. What design would let that person get that particular feeling you have for him or her and take you seriously?

I want to stress on that second part, design and fold a model that will make that person take your feelings seriously instead of going like: "Awww, what a cute little trifle". Know what I mean?

What’s mandatory
-State the details of the model along with the picture: Type of material? Number of sheets? Shape of each sheet? Size of each one and of the finished model? Cuts? Glue?

You have till June 30 to present your model or models. Nepafarius will be the judge and the winner of this challenge will judge the July challenge and host the one in August.


EDIT: I state who's the judge of this challenge since I've finished judging the models of the May challenge.
Last edited by Gerardo on June 2nd, 2020, 2:39 pm, edited 3 times in total.
Top

"Ethics are annoying, I avoid them on principle."-B. Katt
Can't delete account, so I'll open up a new one indefinitely in the future.
Top

That's perfectly fine for this challenge OrigamiasaEnthusiast. So what original model, and its fold, would let that person understand your dislike towards him or her

Maybe a dead chipmunk on a stick....

This thread gives me a reason to design.
But seriously, this could be a good Design Challenge to start on.
"Ethics are annoying, I avoid them on principle."-B. Katt
Can't delete account, so I'll open up a new one indefinitely in the future.
Top

I'm really glad you think that

This one seems quite challenging! Also apart from ODS by Robert Lang, do any of you know other resources on designing models?
Good luck!
Top

June is one third of the way over, I hope everyone has some cool ideas!
Top

C'mon, I saw your ODT work! You can do this. Meanwhile...I don't know if I can....
Is this many submissions this early normal?
"Ethics are annoying, I avoid them on principle."-B. Katt
Can't delete account, so I'll open up a new one indefinitely in the future.
Top

I agree with NeverCeaseToCrease, it is a head-scratcher. I would also say it's very necessary. You know? Remember your thread here in the forum about how non-origamists usually see origami? This is an extension of that. I dare also say that our design topics often make non-origamists see our folds as trifles

As OrigamiasaEnthusiast said, I also bet you can do this, as well as, Nepafarius if he wasn't the judge


OrigamiasaEnthusiast wrote:C'mon, I saw your ODT work! You can do this. Meanwhile...I don't know if I can....
Is this many submissions this early normal?

The idea about creating and folding something to express your dislike for someone was just excellent! Don't get discouraged. Regarding your question, it has happened before. Let's try to get some submissions before the time rans out.
Last edited by Gerardo on June 11th, 2020, 2:37 pm, edited 1 time in total.
Top

You may find some inspiration Here
"Ethics are annoying, I avoid them on principle."-B. Katt
Can't delete account, so I'll open up a new one indefinitely in the future.
Top

Only ten days left! I hope someone has a few ideas!
Top 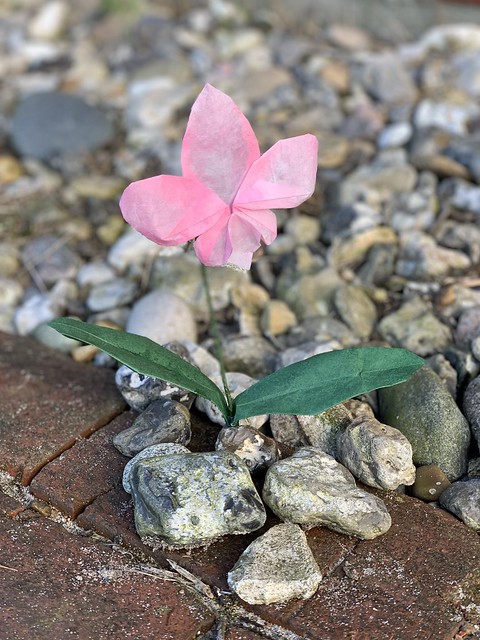 This Tuesday I was playing with paper. My goal was to find a structure suitable for a flower without radial symmetry. The base for this flower is a combination of two preliminary folds - one at the usual location the other at the 1/3 mark. I realized this could be an orchid.

I know a person I really like. She likes orchids. So I think this is a valid design for this challenge.
Top
Post Reply
19 posts