youdougit wrote: on step 83 do you collapse both layers on the top or just one?

I've made a video of folding the ancient dragon...
but don't think it's a guide

it's a speed up folding video

Not sure what i'm doing wrong but i was trying to do step 93 when i saw that my model was locked and as such i could not do it. After a bit of reverse engineering i figured my problem is probably with what i've done at step 80, I sinked the whole thing. Now i'm thinking that maybe i should've kept the fold done at step 78, but i'm not managing to do it

Can anyone confirm, give a hint or maybe a picture of the inside of the model after step 80?

Thanks a lot in advance.

EDIT: Nevermind, done it. It seems all i needed was a night's sleep and some time away.
Top

Hello !
I started doing the ancient dragon and I'm having troubles for the step 115.
I folded the part ahead but when I tried to fold the back, it didn't work. I don't have any corner, so I can't squash it...

I think maybe the problem comes from the fold of the top part.
So it will be nice if you could help me. Maybe someone already had this problem before.
Thanks in advance. ;D
Top

I'm folding the model of the book "works of Satoshi Kamiya" 1995-2003.
I just don't have the same thing on the other layer. I should have a corner but I don't have one. Maybe the problem comes from an old sink fold that I didn't do the right way.

Thanks a lot ! This forum is awesome !

From memory that normally occurs if you did a (semi-)closed sink instead of an open one around step 85. It is important that the model is opened fully for that sink otherwise paper will be trapped later
Top

I watched some videos on it and restarted it. I don't have any problem anymore. In fact, you're right, it came from the sink fold that I didn't opened right.
I can now continue this dragon !! (i hope i won't have problems anymore...)

Thanks for helping me !! ;D
Top

If anyone can help me understand the correct method for the open sinks on step 85 -86 that would be awesome... That step is killing me..
I've tried these steps many times and can't figure out how to sink the paper properly, any help will be much appreciated.

Sinking incorrectly interferes with the steps following 135... I really hope someone can help me figure this out

I realize there usd to be photo tutorials on the first page, but all of the photos are now gone..

regardless, it can be hard to do 85-6, particularly if you are using a foil-based medium, because there is no obvious way to spread the layers to do a clean open sink--this is probably the hardest step in the model. if you have a long, blunt object, such as a chopstick, you can introduce it into the hole in the opposite side of the model to see if you can spread the appropriate layers. it's still hard to do, because the model does not open completely, but it helps. it doesn't have to be perfect as this is the underside of the model.
Top

Steps 85/86 are the exact same concept as step 76. Remember this is an OPEN sink. Treat the outer layers as one layer so that the outer half-layer just wraps inside. Hopefully this makes sense. What @bethnor said is pretty much it, unless you want to unfold a good portion of the model to get that perfect wrinkle-less open sink.

When I read your request, I started folding the dragon with kami so that I could get you some good photographs, but kami is an absolutely terrible paper for this model and it ripped itself to shreds with the sinks and whatnot...not good for pictures.

Then, right as I was going to post this, I realized that I had a half-finished dragon lying around...somewhere. I found it, so here you go: 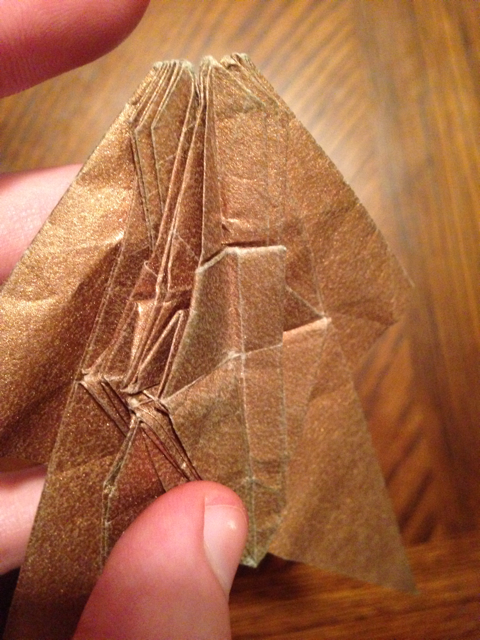 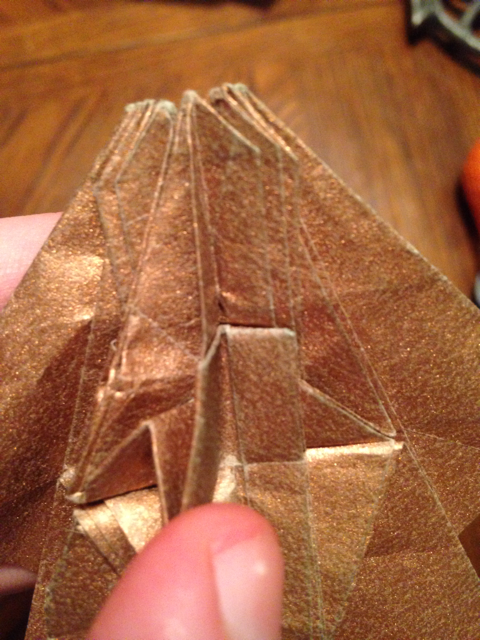 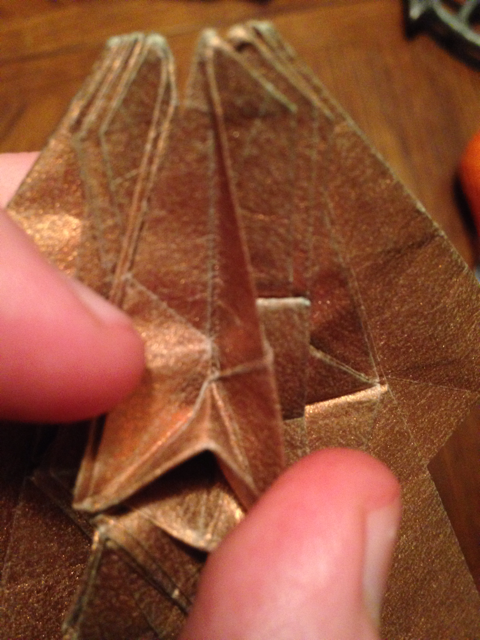 Hopefully something here helps, even though it's after the step. If you want a different shot or angle, let me know and I'll take another picture for you.
-oz
Top

regardless, it can be hard to do 85-6, particularly if you are using a foil-based medium, because there is no obvious way to spread the layers to do a clean open sink--this is probably the hardest step in the model. if you have a long, blunt object, such as a chopstick, you can introduce it into the hole in the opposite side of the model to see if you can spread the appropriate layers. it's still hard to do, because the model does not open completely, but it helps. it doesn't have to be perfect as this is the underside of the model.

I did 85 incorrectly due to a bad video tutorial on youtube, i was overthinking things but now i understand everything , i think i need a large square of origamido because the model becomes extremely thick when crimping the neck and legs..

origamido at its largest is 16". since it comes with deckle edges, your square will likely be slightly smaller than that.

you would have better luck with ogami paper if you insist on something expensive. the cost is comparable, and you will get a 50 cm square guaranteed (slightly larger).

if you are experienced with mc, hanji can be used, and usually comes in widths allowing for 63 cm.

alufoil comes in 26" rolls and is adequate, with all the cons of a paper-backed foil medium.

the largest available is probably fadeless art rolls. i've never tried them myself. just thinking about cutting a decent square from 48" gives me headaches.
Top

Hi guys, how long did it take you to be able to fold the ancient dragon?
It's my ultimate goal and I want to know kind of how much I need to practise before I can fold it

PS: I'm sorry if this is in the wrong thread, I'm new to the forum