I'd advise not.
It's hard folding from 45 by 45 centimetres, so any smaller would not work well.
"Violence isn't the answer but it's always a good start."
-JeossMayhem
Top 
Jorram wrote:Hi guys, has anyone tried folding this with paper smaller than 50x50?
I have a really nice 35x35 sheet and am wondering whether to risk it trying this out only to find out it's impossible. Anyone care to weigh in?

Do not forget to mention the type of paper you want to use. I think that the phoenix in the picture is folded using wax paper.
Pobody's nerfect.

Wow, this is amazing O.o
I will be using tissue foil. I don't think I'm experienced enough for wax paper and every mistake there would result in an unfixable crease, likely to even break the paper.
Top

i folded it twice from 35x35cm foil paper. 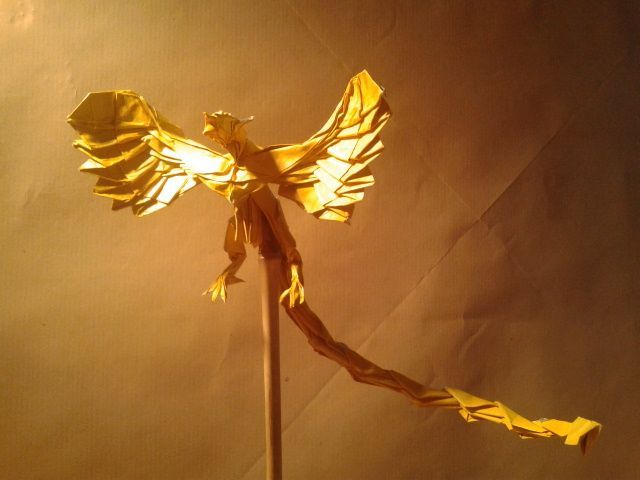 phoenix 3.5
its really hard to get the details on the head but i like the result

Wait, does that mean it's impressive that I folded it out of 21x21cm printer paper on my first attempt and succeeded?
My flickr
I finally got me some mc!
Top

Yeah, I'd say that's pretty good. I tried using printer paper a long time ago, maybe when I was 11 or so, and I probably used the wrong crease pattern and it got super thick.
My instagram: https://www.instagram.com/theplantpsychologist/
My youtube: https://www.youtube.com/channel/UCJPCcy ... U8oLMv5WpQ
My flickr: https://www.flickr.com/people/185437267@N03/
Top

Can anyone give someone who is semi-new to advanced cps tips on this one?
Top
Post Reply
158 posts