by Gerardo
How much liquid can the traditional drinking cup hold? For example how many milliliters can a fold of the model made from a 20 x 20 cm (8 x 8 in) hold? What's the math behind this?

I'll work on the equation for the area of the cup (relative to the size of the initial square) when I get the chance and get back to you on that.
Unless you just want to use Anna's method.

by Gerardo
HAHAHA... after six years here in the forum, I have gotten to know you a bit

. When I saw that you two answered I was kinda expecting that kind of response from origami_8 and that other one from Baltorigamist.

Thank you for your offer Baltorigamist. I would like that very much

by ShuaiJanaiDesu
Interesting question. After googling, the 'Paper Bag Problem' seems to be the closest thing I can find.

The second equation (on the wiki) gives the volume for an open rectangular envelope but a paper cup has a trapezoid shape when flat, so unfortunately not what we're looking for

The first 'external link' has an email conversation about the paper bag problem, so I might go get ideas from that and apply it to the paper cup 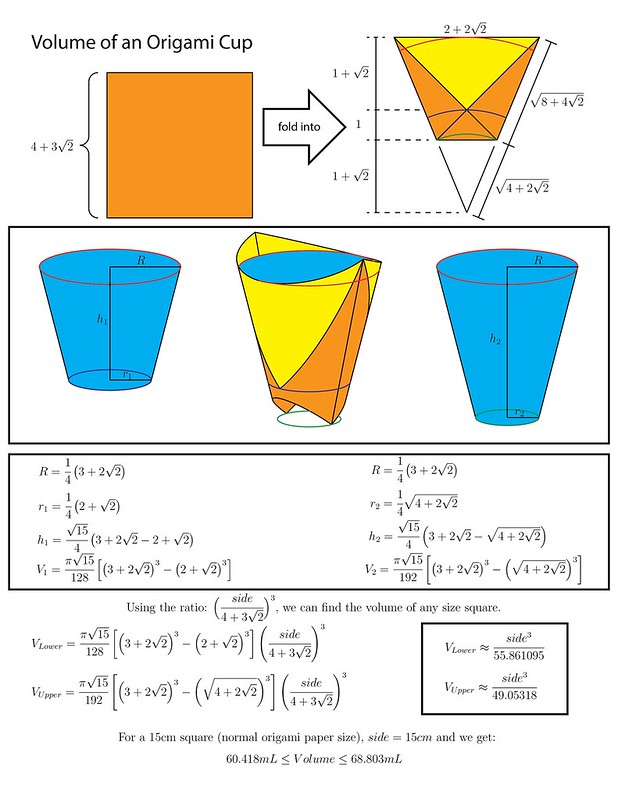 I got a rough estimate of what the volume is. I held the folded cup into a cone shape and calculated the volume of the conical frustums. The equations at the bottom right corner gives the volumes. (Of course, all of this is on the assumption that the maximum volume is achieved when the folded cup is in a conical shape, which may not be the case)

To check my work, I used some measuring cups/spoons to measure about 65mL and it seemed to barely fit in a 15cm size paper cup so the calculations should be right, I hope.

P.S. I spent half of my day trying to perfect the drawing of the 3D cup on Illustrator. lol >.<

by Gerardo
Oh my god! This is crazy awesome ShuaiJanaiDesu

That half a day was worth it; the whole page looks amazing and very illustrative. So if I understood everything correctly, the equation could be a little more precise if we include the curved bottom since that must reduce the capacity compared to a flat bottom. Am I right?


Thank you so much ShuaiJanaiDesu for your help

Proof: I folded one from 10cm square, and on a scale scooped out 18g (+/- 0.5g) from a (plastic) cup of water. Same experiment with 18.4cm = 123-129g.
The experimental error is dominated by the floppiness of the paper and the surface tension of the water in the cup. When I poured the water back in, the scale reset to zero so absorption of water by the paper is negligeable.

That half a day was worth it; the whole page looks amazing and very illustrative. So if I understood everything correctly, the equation could be a little more precise if we include the curved bottom since that must reduce the capacity compared to a flat bottom. Am I right?


Thank you so much ShuaiJanaiDesu for your help

Thanks for the compliment! Yes, the bottom curved part of the cup was too difficult to figure out so I decided to just take the volume too large and volume too small which are easier to calculate.

As I've said before, even if we do calculate the exact volume of this cone shape, it might not be the true answer since there may be a different shape of the cup that can hold more water. (Although the answer should be close)

by Gerardo
You guys are awesome! Thank you so much malifold

. This is great info. Baltorigamist, can you complement their work to gain a bit more accuracy?

by Baltorigamist
Yeah, I should have something done this afternoon. 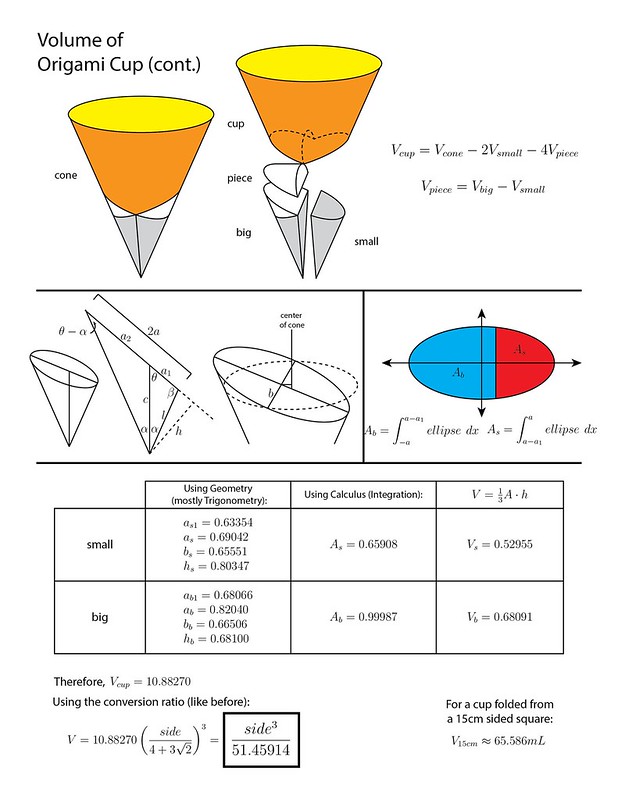 Found a way to calculate the volume of this cup.

The way I did it was to divide the cone shape into pieces shown in the top section. So,
Cup = Cone - 4*Big + 2*Small

I was able to find the area of the base by doing Integration on the equation of the ellipse: x^2/a^2 + y^2/b^2 = 1. And to find a, b, and h, geometry(mostly trigonometry due to all the triangles) was used.

(Finally done! I hadn't done math lately but got to do some interesting math, so Thanks Gerardo for the interesting question!

by Gerardo
That's a way smart solution ShuaiJanaiDesu! I'm really glad you enjoyed coming up with it

Neorigami's anniversary is coming up (August 11th). Have you ever visited the blog? It would be cool if you post a blog article about your findings, including your two images. I think those origami/math lovers will like it a lot. You'd have to create an account, if you haven't already, in order to post it.

If you decide to make that blog article. Wait till its anniversary. Everybody is invited to share something on that day.