Hi does anyone has any information whether or not this model has been diagrammed?

Yes, I would like to know too. This must be the best origami horse that I've seen so far!
Top

It looks slightly modified, but I think it's essentially the same as a Horse he sent me about 15 years ago, which used the same base as a Lion that was published in one of the old BOS convention books. I did rough diagrams (very rough) for my personal curiosity, but knowing Stephen he would probably prefer to wait until he was ready to release his own.

Stephen was/is very prolific and must have a lot of excellent unpublished material. I hope we get to see it some day.
Top

I did some poking around and found out Stephen has in fact diagrammed a horse.

Hopes it's the same horse.
Top

Ive also been trying to find more information about that horse...and saw, that Gabriel Vong did fold that hourse. 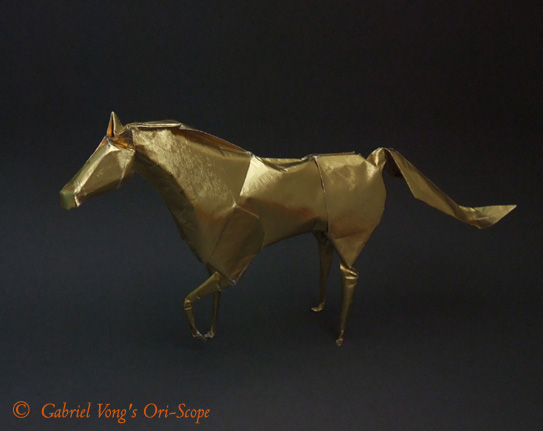 so I think there should be a diagramm available or?!

Thanks for the interest in my Horse. It has not been formally diagrammed, but I did teach it at the OrigamiUSA Convention in 2005. Right after the convention Brian Chan wanted to diagram the model, so I went through it with him while he made detailed hand drawn sketches of the steps. He thought he might draw them up formally if he had time, but I don't believe he did. I should do it.

Here are a couple of photos of the same exact physical model that was displayed in the Peabody-Essex Museum, with perhaps slight sculptural refreshing, and with better camera angles, although I really need to get a good camera--these were done with a four-year-old Samsung Flip-Shot three megapixel feature phone, and suffer from color consistency and other exposure and focus issues. But the shots came out okay after some adjustments on the computer.

I hate to resurrect an ancient thread, but I was curious if Mr. Weiss ever frequents the forum anymore and has any additional information on his wonderful horse? I still think this is one of the better origami horses out there and would love to see even a video diagram of it.
Top
Post Reply
7 posts • Page 1 of 1